Static analysis is a way of automatically analysing code without executing it. As a development team, this is really powerful as once the static analysis software is up, running and integrated with your deployment pipelines you can gain an extra tester in your team with little ongoing maintenance! While some of the issues static analysis software finds are not always high value (code styling for example) some are issues your engineers are less likely to notice such as obscure security flaws and out of date dependencies.

SonarQube is a static analysis tool that I have been using and evangelising at Just Eat. Some of the issues it finds:

This information is all collated and displayed in a central dashboard for your project which gives you an overall view of the “quality” of your project. While some of the issues above might seem trivial (the code smells category is often guilty of this) even in these cases, monitoring the trivial metrics to see if they deteriorate over time is a useful measure for standards dropping within your team. 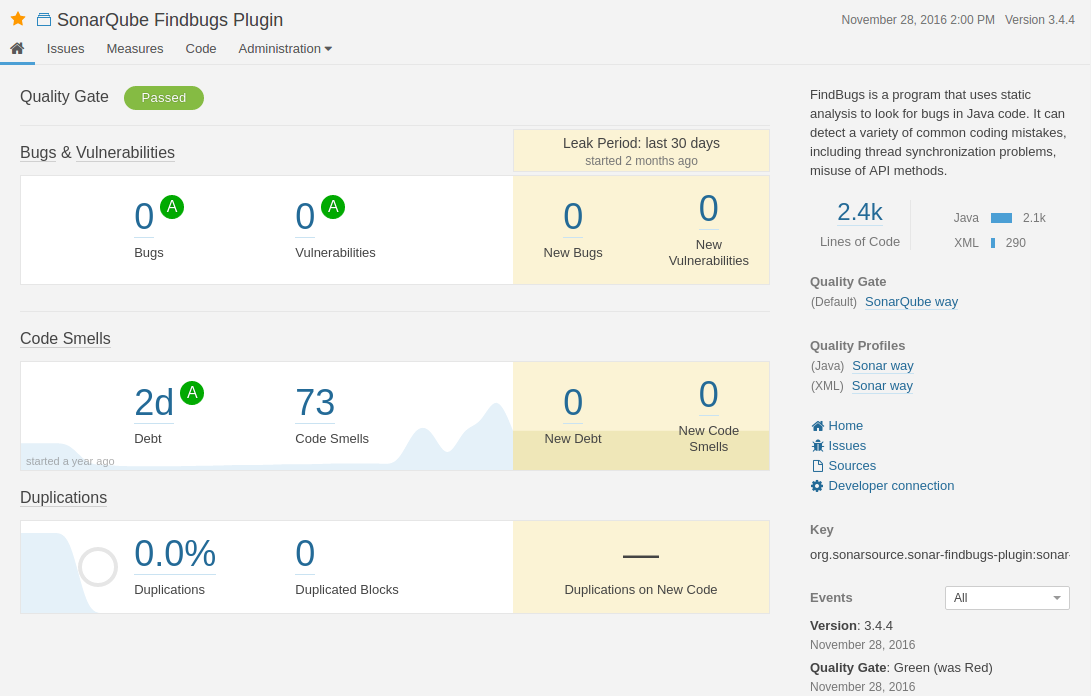 Related to dropping standards are what SonarQube calls Quality Gates. Using these you can set triggers to throw either warnings or errors in your CI builds based on rules set in your Quality Gate. Example rules include:

If any of these rules are broken you can choose to throw warnings or errors during your build process. Sonarqube can even be set up to break your build. But in my opinion, this isn’t a good idea.

The Case Against Breaking the Build

BuildBreaker is an official SonarQube plugin which you can use to break your CI builds if a Quality Gate triggers any errors. On the face of it, this makes sense. You as a QA want your developers to maintain high standards so stopping them from breaking the Quality Gate rules by stopping there build from succeeding is an easy way to do this.

But if only it were that simple. Setting up SonarQube in this way has some key disadvantages:

SonarQube should be used as a passive monitor of the health of your projects. By using it in this way you can start to work with your team rather than against them and use the metrics SonarQube discovers to start having conversations about how things might improve and even get involved in improving them yourself! SonarQube themselves did a blog post “Why You Shouldn’t Use Build Breaker” with similar opinions.

The final feature of SonarQube you should be aware of is it’s GitHub integration. With the Sonar-Github plugin, you can set up integration with Github to comment on Pull Requests (PR) with issues found by SonarQube in the changes during your CI builds.

One issue to note is you will probably want to differentiate between PR builds and builds of your master branch.

SonarQube keeps a track of your latest build results to compare the next build to for purpose of its Quality Gate. However, for PR builds you probably don’t want the results stored as you want to always compare the PR build to latest results from _master _otherwise a developer could just rebuild their branch in CI and the new issues previously found would no longer be new and disappear! Below is a PowerShell script I have used in teams to do this differentiation between PR and master branches:

The key difference between the two SonarQube.Scanner.MSBuild.exe commands is in the analysis mode Preview the results are not saved by the SonarQube server so the comparison is always done against the latest master build instead.

The Preview option is being deprecated according to the documentation, however, I have not seen an alternative proposed yet so cannot suggest how you might handle this in SonarQube 6.6+.

SonarQube now supports .NET Core as of SonarQube Scanner for MSBuild version 2.3. So the setup is actually quite simple:

And that is it! Well almost…

Setting Up a Project Guid

For SonarQube to recognise your project from other projects it needs an identifier. The development team decided to use the ProjectGuid property in your .csproj file. You might not have one as they are not required by default. So double check your csproj files and update them to include a ProjectGuid property. If you miss this you will see the following error in your CI logs:

WARNING: The following projects do not have a valid ProjectGuid and were not built using a valid solution (.sln) thus will be skipped from analysis…

If you see that warning add your ProjectGuid!